Utomik provides 1000+ PC games in a monthly subscription, with more titles being added every week. Using our state of the art technology, games are playable after downloading only a small part. Get the full gaming experience with no streaming and no lag.

There is a wide variety of games available thanks to partnerships with publishers and developers such as THQ Nordic, Idea Factory International, Curve Digital and 100+ more. Games from multiple genres such as FPS, RPG, Strategy, Action Adventure, Indie and many more provide a deeply diverse catalog with something to enjoy for every kind of gamer.

On December 20th 2019 Utomik signed up The Sinking City for our subscription service in good faith with BBI/Nacon, after which we announced that The Sinking City was coming to Utomik. Shortly after the announcement, Frogwares contacted us and informed us that BBI/Nacon should not have given us access to the game, because it was not theirs to give.
‍
After checking with BBI/Nacon, we were informed of the existing conflict between BBI/Nacon and Frogwares. We then decided to immediately pull back the game from our release schedule, our website and other media. We have no intention to ever release games on our platform for which the rights are not 100% clear. As far as Utomik was concerned this ended our unintentional involvement in the situation.
‍
Utomik is committed to sustainability for independent game developers. We aim to make sure that everyone can earn a fair living making great games by connecting gamers and developers on our platform.

Achievements and Add To List now available on Utomik 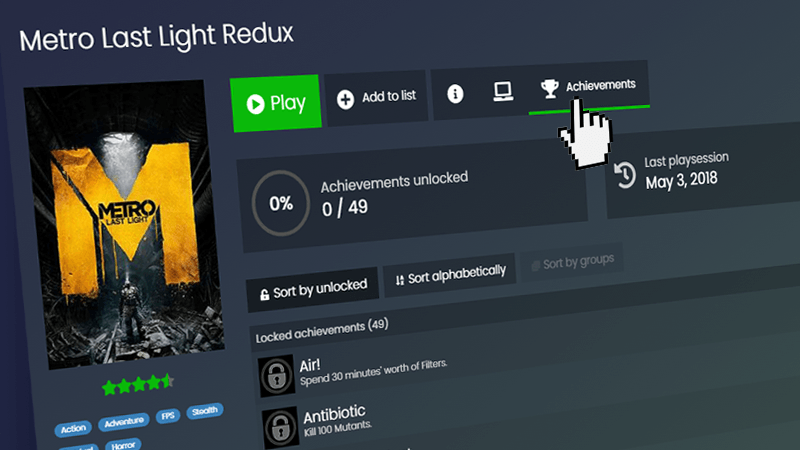 December 13th, 2018 - Utomik is happy to offer an update to its client full of new, much requested features such as Achievements and Add To List! Achievements add a new way to approach the games you already love on Utomik while Add To List offers a means to save a title for later that caught your eye. These are just two recent improvements to the platform as we’re continuously listening to user feedback to further shape Utomik as the most user-friendly service available.

We've added achievement support for the most recent releases on Utomik and we’ll continue to provide achievements for all new releases to come! Do you have an old favorite that you’d want to see achievements for? We’ve got you covered there too! We’re adding achievements for existing games on the platform and will roll these out over the coming months.

Add To List will help you keep track of which games from our 850+ you want to play, in a simple and streamlined way. Simply clicking “Add to list” will curate a personal channel showing all the games you’ve selected and that you’re excited to play. 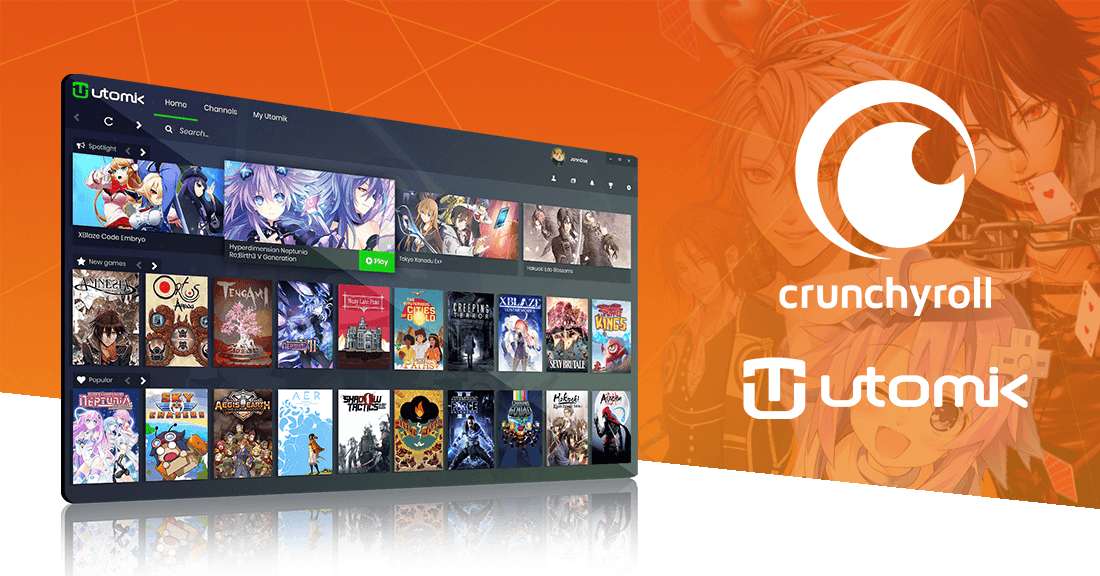 Subscribers who opt either to join or upgrade to the Crunchyroll Super Fan Packwill be able to enjoy the full Utomik experience, as well as additional services from complementary partners. As announced during Crunchyroll Expo, J-Novel Club and ANiUTa will also be included in the new subscription tier.

Utomik provides 800+ PC games in a monthly subscription, with more titles being added every week. Using our state of the art technology, games are playable after downloading only a small part. Get the full gaming experience with no streaming and no lag.

There is a wide variety of games available thanks to partnerships with publishers and developers such as Idea Factory International, SEGA, Warner Bros. Games, Aksys Games, Curve Digital and 100+ more. Games from multiple genres such as JRPG, Visual Novels, Strategy, Action Adventure, Puzzle and many more provide a deeply diverse catalogue with something to enjoy for every kind of gamer.

“We love bringing great content to our community, so for us it’s perfect to find a partner who prides themselves on doing the same and can bring our games to even more people. It’s great that we’ve got that in common with Crunchyroll.” - Doki Tops, CEO of Utomik

Crunchyroll is the world’s largest destination for anime and manga, boasting a global community of more than 40 million registered users and over 1 million subscribers. Fans connect through the most complete anime library including "Naruto Shippuden", "Attack on Titan", and "Dragon Ball Super" events such as Crunchyroll Expo, Anime Awards, Crunchyroll News, and can purchase related merchandise through its online store. Through its app on game consoles, set-top boxes, mobile devices and more, Crunchyroll delivers content from leading media producers directly to viewers translated professionally in multiple languages. The service is available for free or through a premium offering that allows users to watch ad-free with access to simulcasts—top series available immediately after Japanese broadcast. 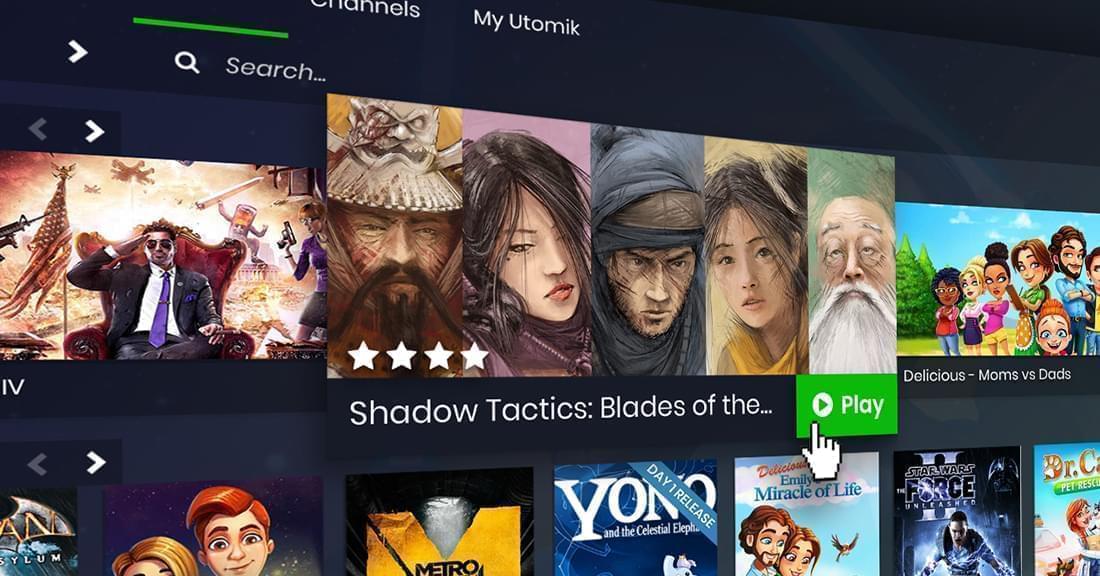 We have grown from an independent startup with no industry support to having a library of over 750 games and 100+ publishing partners in a little over 2 years. That support includes Warner Bros. Games, Disney, SEGA, THQ Nordic, Epic Games, Curve Digital, IO Interactive and many more. It is more than any other subscription gaming platform out there and it is just the beginning.

Founded in 2014 by a small team of dedicated Dutch gamers, Utomik is a pioneering startup based in The Netherlands and California with offices in Eindhoven and Los Angeles. It is one of the first subscription based gaming platforms to hit the market. We are proud to be an integral part in bringing the Netflix and Spotify model to the world of video games.

As we are now officially launched, users get unlimited access to play over 750 games for USD 6.99 a month* or USD 9.99 a month for a four-person Family Plan. The launch will also include a new and improved client design.

Recent additions to our service include the Batman: Arkham series, Saints Row IV, Human: Fall Flat, Shadow Tactics: Blades of the Shogun, The Flame in the Flood, Furi and many more. With weekly new releases and 20+ games added a month, we ensure the selection remains fresh. We were the first subscription service to bring Day One Releases to our platform, like Yono and the Celestial Elephants and Newt One, and subscribers can expect even more of those in the future.

Noticed we snuck in IO Interactive when we mentioned some of our current partners earlier? We are extremely happy to announce that we recently partnered with IO Interactive to bring the Hitman series to Utomik! The ink is still drying, but you can expect the first games to go live this summer.

Our smart download technology ensures you play games instantly with the click of a button. Instead of streaming games from a server, Utomik users download a small part to their own PC. The rest downloads to their PC while they play. This technology has continued to improve greatly over the years, ensuring the fastest and best possible gaming experience!

We want to thank everyone who has supported us over the years and helped us get to this point. Those interested in signing up or starting a free 14-day trial can head to our website. 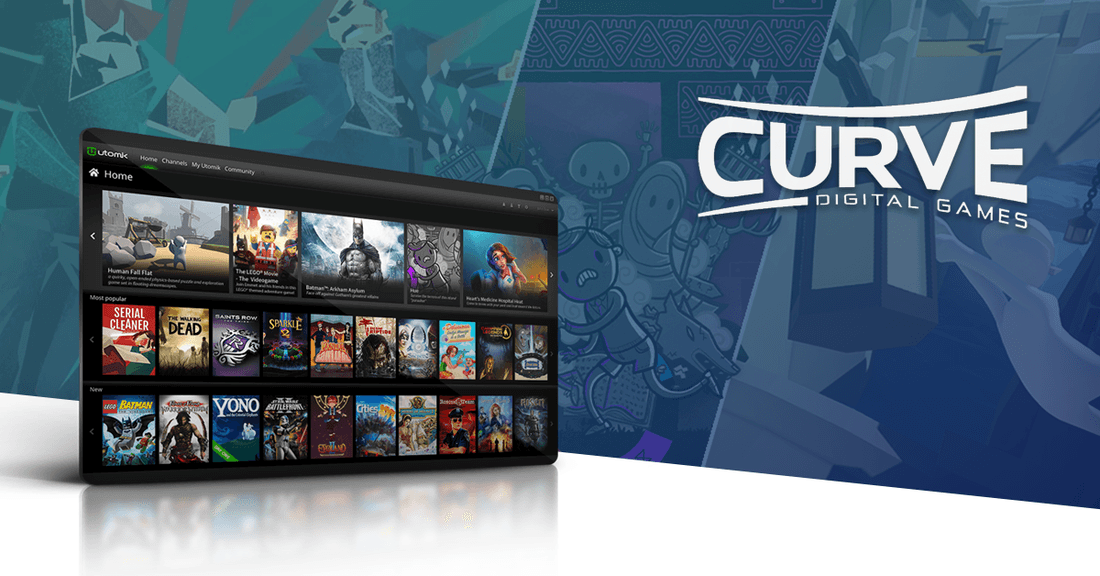 We proudly announce to have partnered with indie publisher extraordinaire, Curve Digital! Starting today, we unleash an amazing selection of high-quality titles on Utomik, your unlimited play PC gaming subscription.

Just as they like to do at Curve, we will let the games do the talking. Experience the multi-award-winning Hue, YouTube sensation Human: Fall Flat, hilarious couch cooperative Stikbold! A Dodgeball Adventure, gorgeous stealth game Serial Cleaner, and the (literally) breathtaking Manual Samuel!

But that’s not all, folks! Look forward to The Flame in the Flood, The Little Acre, Stealth Bastard Deluxe, Stealth Inc 2: A Game of Clones, and Pumped BMX+ on Utomik in the coming months.

It’s our mission to unleash gaming. We bring you a weekly growing library of 700+ hand-picked games. Get instant access to a varied collection of AAA classics, retro, indie, and family-friendly titles with Utomik’s smart download tech.

New users can sign up for a 14-day free trial on www.utomik.com and give the service a spin.