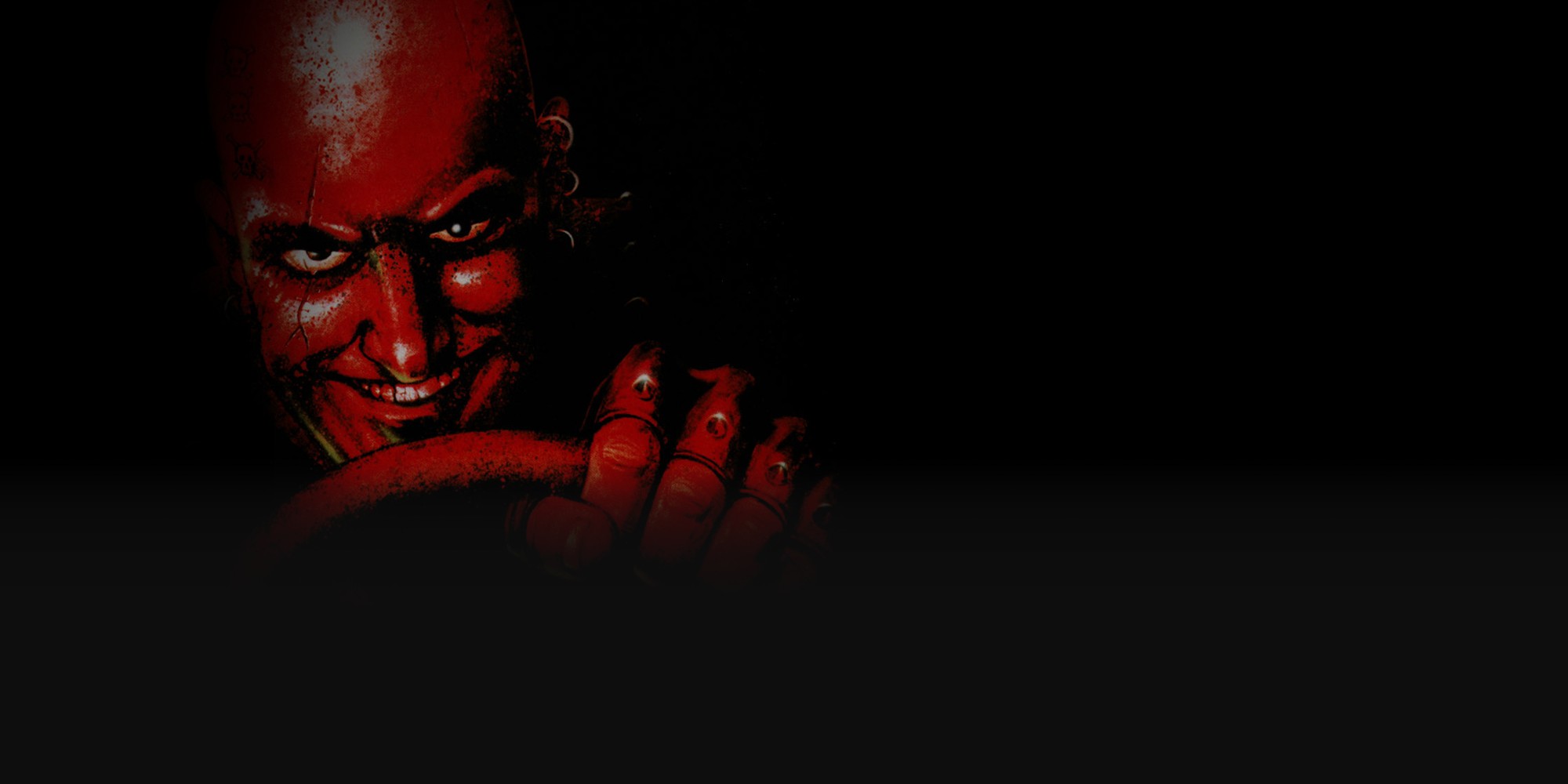 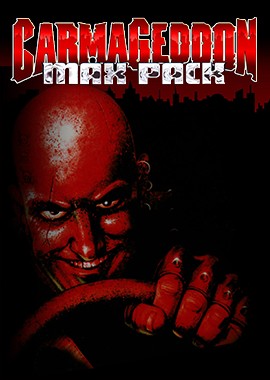 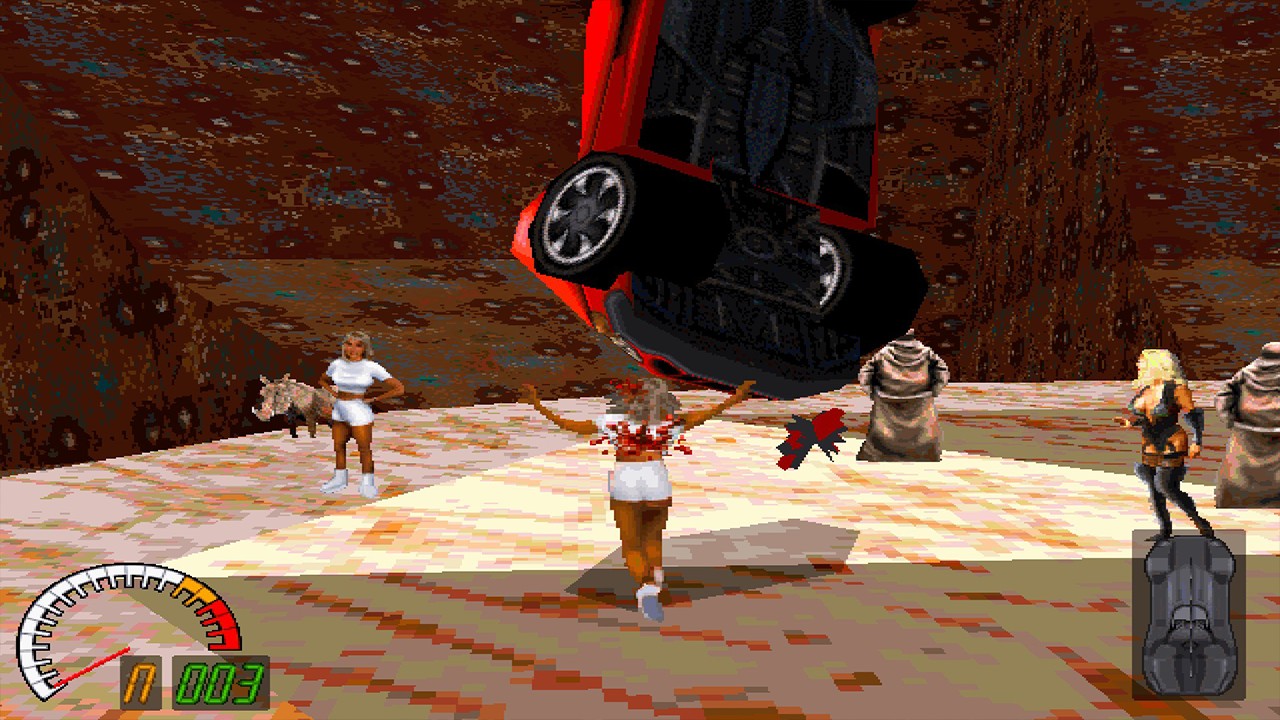 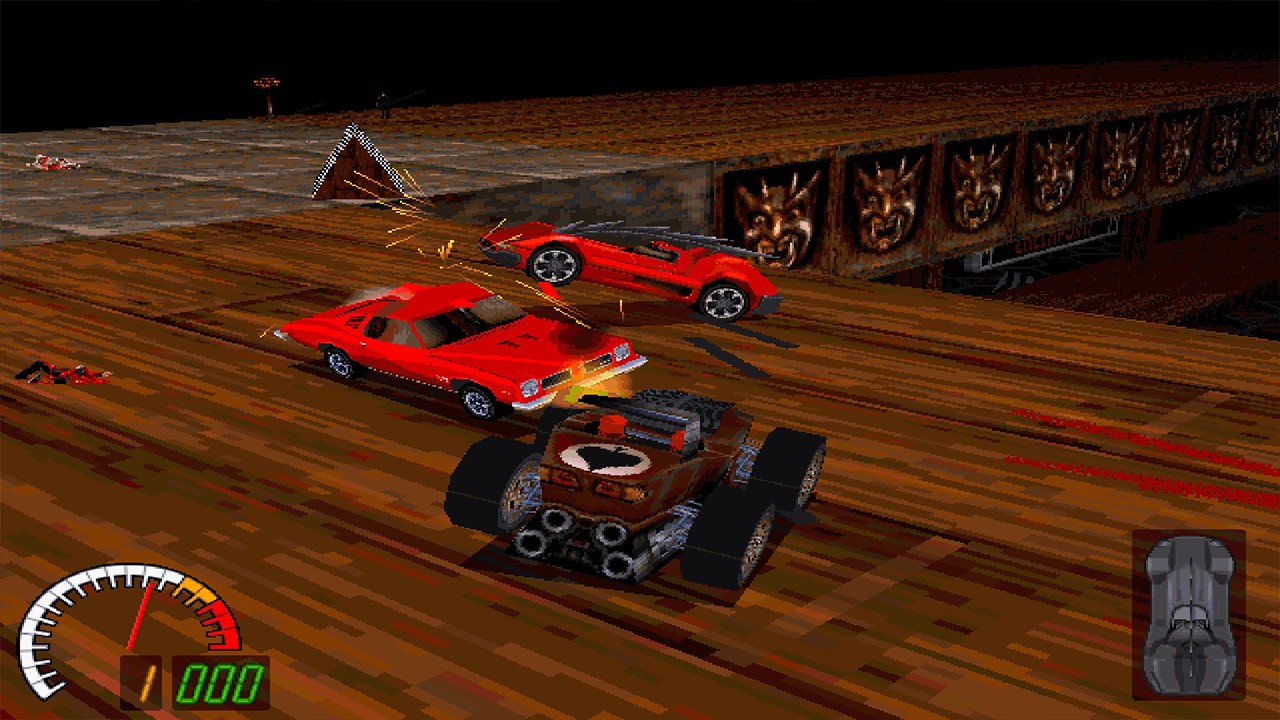 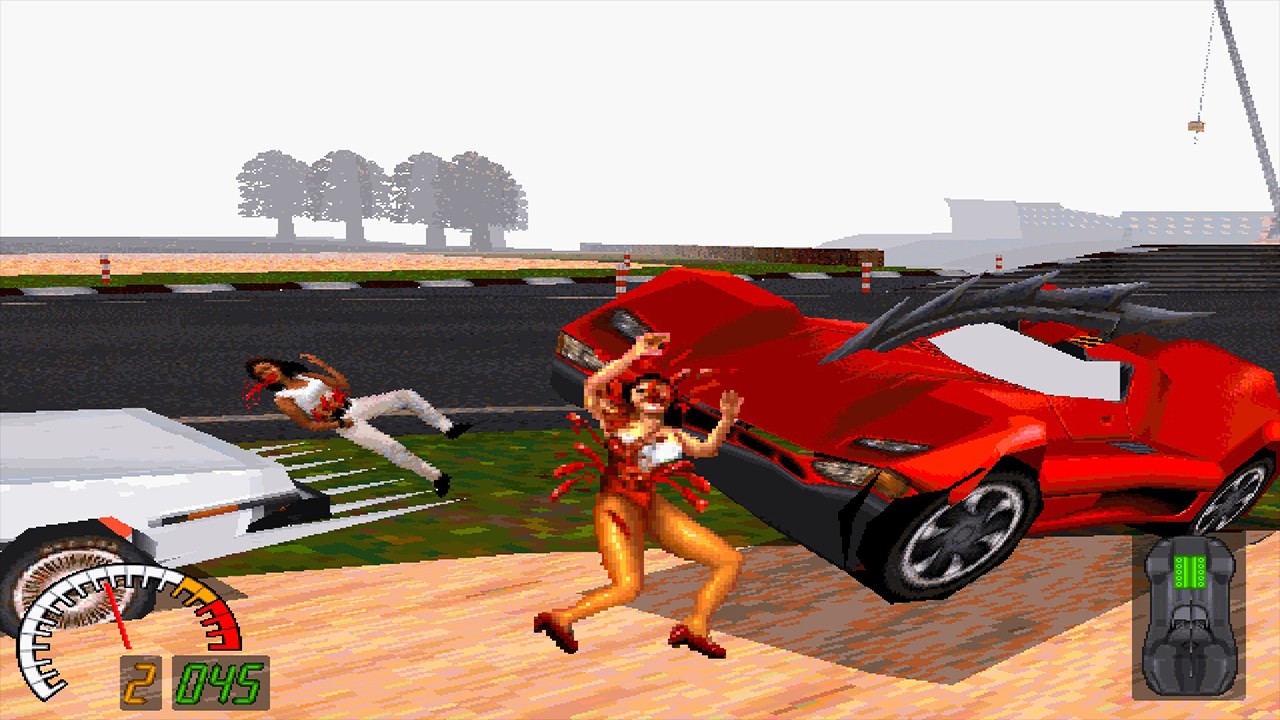 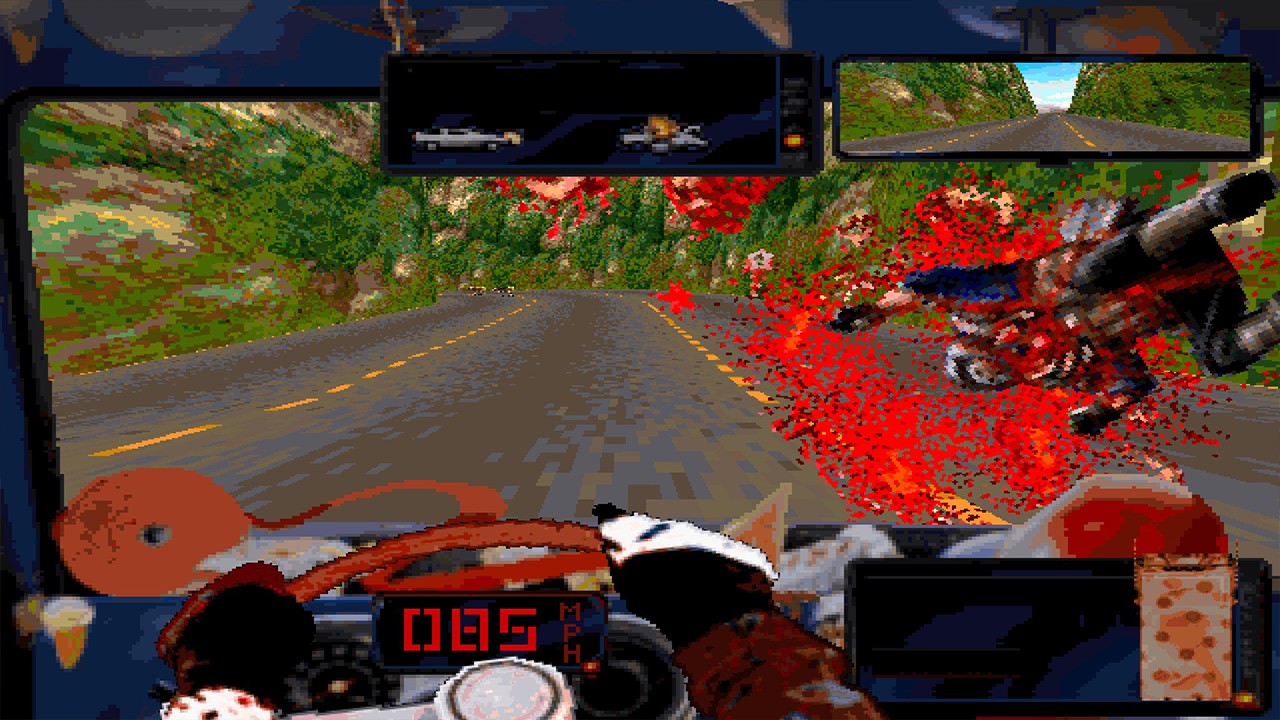 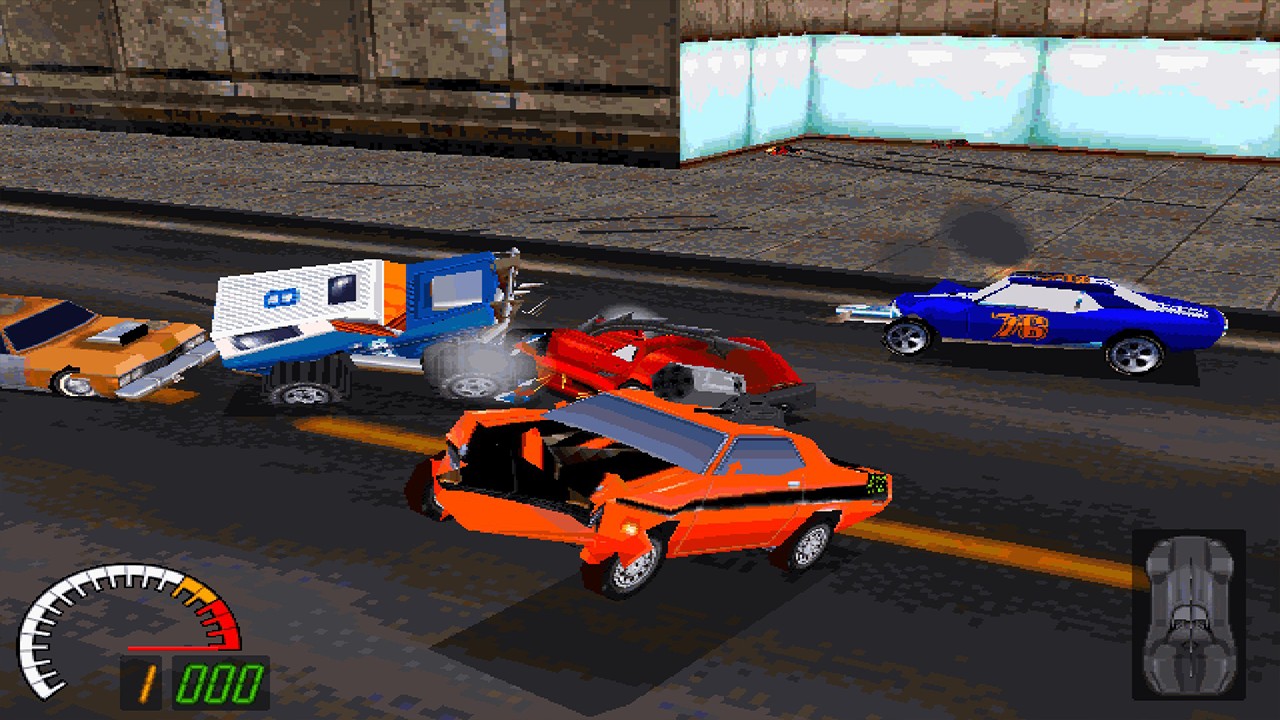 Carmageddon is the original freeform driving sensation, where pedestrians (and cows!) equal points, and your opponents are a bunch of crazies in a twisted mix of automotive killing machines. The game features anarchic drive-wherever-you-like gameplay and over-the-top surreal comedy violence. It’s the racing game where racing is for wimps.

Now the same Mac & PC classic that was BANNED AROUND THE WORLD is back!

Carmageddon features real-world environments that have been turned into killing fields, where the locals stay out on the streets at their peril. As well as using your car as a weapon, every level is sprinkled generously with power-ups that have a vast variety of mad effects, adding a whole extra level of craziness to the proceedings. In every event you have the option to “play it your way”… Waste all your opponents, kill every pedestrian, or (perish the thought) complete all the laps. Oh and watch out – the cops in their super-tough armoured patrol vehicles are lurking, and if they catch you being bad they’ll be down on you like several tons of cold pork.

"Ladies and gentlemen, start your engines! Members of the public, you have ONE minute to reach minimum safe distance!"

The aim is for the player to work their way up the ranking system, from 99th place to first. The player vehicle is pitted against a number of computer controlled competitors, in locations such as cities, mines and desert towns. Levels can be beaten in one of three ways:

Each level has a time limit, but more time may be gained by passing through checkpoints, collecting powerups, damaging/destroying the competitors' cars, and by running over pedestrians (with bonuses awarded for style). These actions also reward the player with Credits, which can be used to make instant repairs or recover the car (after falling down a chasm, for example). They can also be used to upgrade Armour, Power and Offense stats in the Parts Shop between races. This is also the time to switch which car to drive if others have been obtained. As well as opponents partaking in the 'race', some levels also contain a number of heavily armored Cop Cars, which will activate their sirens and hound the player when provoked. They can be attacked and destroyed, but do not count as opponents. A single "Super Squad Car" exists in one level, and it can be claimed if destroyed. An Action Replay with multiple camera viewpoints is available at any point during a race.

Carmageddon won the “Game of the Year” trophy in the 1997 PC Zone Reader awards.

SELECTED REVIEWS OF THE ORIGINAL GAME Originally released for the PC in 1997, Carmageddon was an instant hit and the titles went on to sell over 2 million copies worldwide. Here’s what a sample of the gaming press thought at the time:

“Carmageddon, to get straight to the point, is one of the best computer games I've ever played… Carmageddon is God!” - Duncan McDonald 95% Classic Award PC Zone Magazine

“Carmageddon is one of those games that only come along once in a blue moon. An essential purchase.” - Escape Magazine 6 out of 6

“The gameplay is spot on and anyone with a dark enough sense of humour should give it a go.” - Computer Gaming World 4 out of 5

“So next time you gun down coppers on GTA VI, just remember, Carmageddon’s controversy was there first, and you have a lot to thank it for.” - RetroGarden

Carmageddon is the first of a series of graphically violent driving-oriented video games. It was conceived and developed by Stainless Games, published by SCi and released June 30, 1997 on PC & Mac. It was, and remains, a poster child for video game controversy. The controversy surrounded the game's central premise; that of earning reward for running down innocent pedestrians. The game was notable for its realistic and ground-breaking physics, and for its in-game action replay features. It was also one of the earliest examples of a sandbox 3D driving game, and may have influenced other later games including the Driver and Grand Theft Auto series.

ABOUT STAINLESS GAMES Stainless was founded in 1994 by Patrick Buckland, a veteran of the games industry going back to the Jurassic period of 1982, and Neil Barnden, who used to have hair like a mammoth. A team of 8 worked on the original Carmageddon at Stainless, and 5 are still with the company today, although a couple of them are now kept manacled in a small padded room in the cellar.

Stainless Games now employs around one hundred mad, dedicated people of assorted gender, height and width. They can all be found dangling precariously from a small chalky rock just off the South Coast of England.