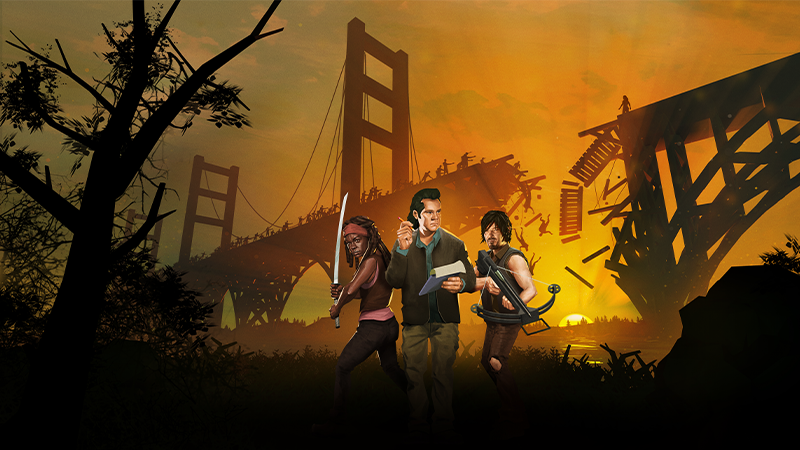 Halloween is only days away. Have the holiday spirits caught you already, now that the veil between this world and the next is thinning? Do the pumpkins on your porch scare away unwanted visitors, and have the spiders in your house come out to play? We at Utomik would love to help you celebrate the season to its fullest. We’ve been featuring great Halloween game recommendations on our social media all week, but some of our newest games are perfect for a spooky night, too!

Imagine them together. The Walking Dead; that comic book-turned-immensely popular television show where a group of people struggle to survive. The walking dead (affectionately called ‘walkers’) are never far away. Now, think about Bridge Constructor; where you build bridges so that cars and trucks may pass, but doing so is actually deceptively difficult.

In Bridge Constructor: The Walking Dead, you get the best of both worlds. Play as The Walking Dead fan favorites like Daryl and Michonne and navigate increasingly difficult situations where the only way out is building a bridge. You might have to crush a lot of zombies so they don’t devour you on the other side. Don’t forget to make sure that the bridge doesn’t drop out halfway through, killing the ones you’re supposed to be saving in the first place. Use strategy, bait, and even explosives. We never told you surviving the zombie apocalypse was going to be easy!

Bridge Constructor: The Walking Dead is an addictive and fun game that’s not for the faint of heart. Expect plenty of violence and gore amid struggling with the game’s very realistic physics. After all, zombies can die in very creative ways. Perfect for Halloween!

In Defend the Rook, a Day One game on Utomik, you must battle the invading forces on a chessboard battlefield together with the Warrior, the Rogue and the Sorcerer.

The kingdom of the Golden Queen is tormented by invading hordes much too frequently for her liking. To quell the threat that these dark monsters pose, the Golden Queen enlists a powerful Magister. His biggest weapon: a Rook, a floating castle inhabited by the most feared heroes in history. The Rook is immensely powerful, but beware: if the Rook is defeated, so are you!

Place towers tactically and upgrade your units with the gold and experience points you amass each battle. Pick a set of spells to help you, and defeat wave after wave of monsters until you finally defeat the boss...or your Rook is defeated instead. Watch out, because monsters can spawn anywhere on the board! In this roguelike with tower defense elements, your challenges are manifold. Will your Rook dominate?

Hercules and Megara are back! During their previous adventures, they have overcome obstacle after obstacle, but by doing so they have angered the gods! Now, they face a beast worthy of Hercules’s strength, and it’s trampling the countryside unchecked. Help restore Mother Nature and save her from destruction! At your disposal are your own abilities as Hercules and Megara, your array of helpers, and...fire hydrants!

We at Utomik love the Hercules games, and 12 Labours of Hercules IV: Mother Nature is another gem. The basics are simple: use resources to upgrade buildings or remove obstacles. But you’ll have to be smart about it. Boulders? Only Hercules can deal with those. And then there’s Hercules’s evil twin, who scares off your workers if you don’t pay attention for a moment! In more than 50 new levels (and one bonus episode; can you find it?), you team up with King Midas and Epeius, and you build the Trojan Horse! What is stopping you from diving into this time management game right now?

Alabama Smith in the Quest of Fate

Years after the events of Escape from Pompeii, archeologist Alabama Smith (now graduated) is asked to help the Dean of the University of Yale once again. His newest adventure in Alabama Smith in the Quest of Fate takes him to Machu Picchu to find the Crystals of Fortune. Point-and-click your way through more than 25 locations in 6 gorgeously illustrated chapters, and play as several characters. Can you find the alternative ending?