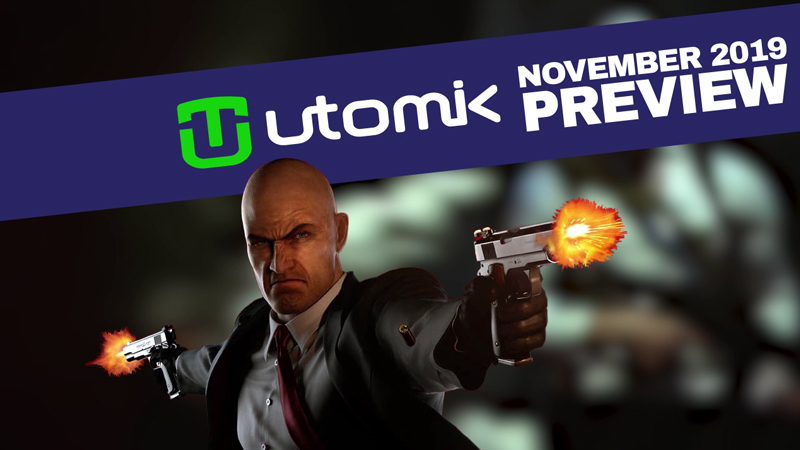 Whether you enjoy sneaking around as a bald guy with a barcode in his neck, managing a Viking clan to survive a harsh world, classic 2D fighting games, or a fresh new roguelike action game, we’ve got you covered and more! Just watch the video below for some of the great titles landing on Utomik in November.

Also, keep an eye out for our great Black Friday and Cyber Monday deals coming up! Bookmark the page or leave your email address to be notified when the deals go live!

Hitman: Absolution - Shave your head clean, put on a red tie, and draw a barcode in your neck as it’s time to once again assume the iconic role of Agent 47 in Hitman: Absolution. The series returns to form in a more accessible way. Undertake the most personal contract to date as Agent 47 is betrayed by the Agency and hunted by the police. Can you find redemption in a corrupt world?

Fabulous - New York to LA - After rocking the fashion world during New York’s Fashion Week, Angela wants more! Next stop: Hollywood! Welcome to the most sparkly time management story game ever – where nimble fingers are a must and Fashion is Queen! But fame has its price… Soon Angela realizes she’s losing an important part of who she was, and becoming her own worst enemy.

Dead in Vinland - Dead in Vinland is a deep survival management simulation mixed with RPG and adventure elements. Find and gather resources, secure a supply of food, take care of the mental and physical health of your characters, fight diseases and wounds, ration your water supplies, and endure the elements. The version we are releasing on Utomik includes all three released DLC packs for a bunch of extra content: The Vallhund, Norse Side Stories, and Endless Mode: Battle Of The Heodenings.

The King of Fighters XIII - SNK Playmore’s flagship 2D versus fighting title returns in an ultimate version on Utomik. Learn the basics in the Tutorial Mode and show them off against the computer in either Story Mode, Missions, or 3-On-3 Team Battle. Choose a default team of three characters or make your own team and take on CPU opponents for the victory. Will you become the ultimate King of Fighters?

Space Robinson - After crash-landing on a distant planet, you quickly realize that this place is not as friendly as it seems. Shoot your way through randomly generated worlds to try to survive and find out what happened to the colonists you were sent out to help.

Fractured Minds (Day One release) - Fractured Minds is an immersive artistic short game, exploring anxiety and mental health issues. It releases in support of the ‘Safe in Our World' charity to foster worldwide mental health awareness within the video game industry and beyond. Created by 17-year-old Emily Mitchell, with the hope of aiding understanding and awareness of mental illness, the game is the winner of the BAFTA Young Game Designers Award.

Sigma Theory: Global Cold War v1.0 - After a little over six months in Early Access, Sigma Theory: Global Cold War, a turn-based strategy game about a promising, radical new technology that causes a global cold war is going to release fully on November 21. Included in v1.0 is a Story Mode, new agents, reworked mechanics, and various balancing tweaks and other improvements to make the game even better!