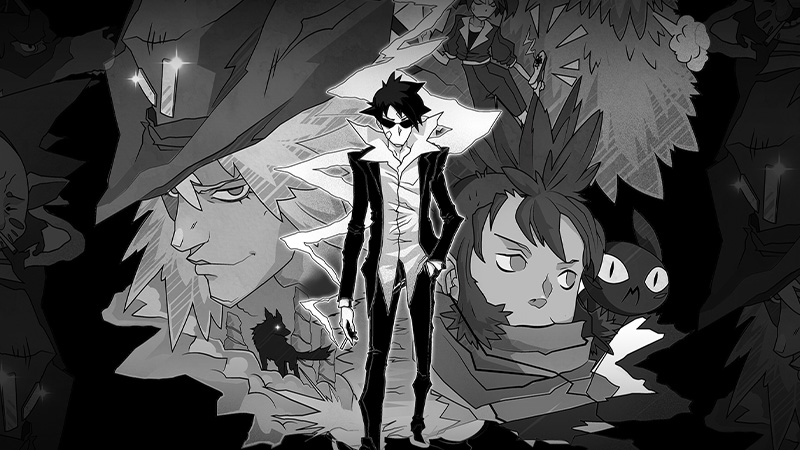 What game has slick monochrome art, characters with punk-ass personalities and mech fights? Wolfstride is now live on Utomik, and it’s already giving us attitude. The attitude doesn’t stop there, though. This week, we also have Hiddenverse: Divided Kingdom and Mermaid Adventures: The Frozen Time for you. Both of which have their own sets of characters causing problems, but it’s nothing that can’t be solved with some clever puzzle skills.

By the way, we highly recommend checking out the trailer this time around. Let’s get into it!

We have some incredible 90s vibes over here, but give it that extra cool edge.

Wolfstride is a maturely immature RPG in which a trio of troublemakers somehow find themselves running away from their past and then running *through* a huge mech tournament. The soundtrack is an absolute banger, and both the art and pixel art are clean and stylishly monochrome, with bold lines.

Inheriting a junkyard has its perks, as it gives your team enough parts to tinker with to create your own customized mech. Take part in the turn-based tournament, whether you prefer offense or defense, and storm the top. Become part of the gang, each character having their own talents and quirks; brought to life by each other and the loving writing. Explore every corner of Rain City and meet even more colorful characters who may be willing to help you out. Though, not all of them are all fun and games. Some will waste no time hurling biting remarks at you, but that’s the spice of life. Stride onward!

The Royal Council is squabbling over the source of ancient magic, but time is running out! The kingdom is being torn apart in the meantime. To make matters worse, their last hope, Lady Sarah, has been poisoned. Enter this atmospheric steampunk world filled with hidden object games and clever mechanisms. Can you pick up the pieces and find the culprit in Hiddenverse: Divided Kingdom before it’s too late?

Alice’s underwater kingdom is in peril, no thanks to a humongous octopus and its lackeys wreaking havoc. It’s up to you and the power of match-3 and friendship to put a stop to it! Mermaid Adventures: The Frozen Time has you restore the kingdom and return peace to the deepsea they call their home. Some help from a mystical, magical turtle sorceress would be very welcome as you take on the many levels, including hidden object games and cute puzzles!