Utomik launches its Open Beta Subscription gaming service for a discounted price of $5.99 per month 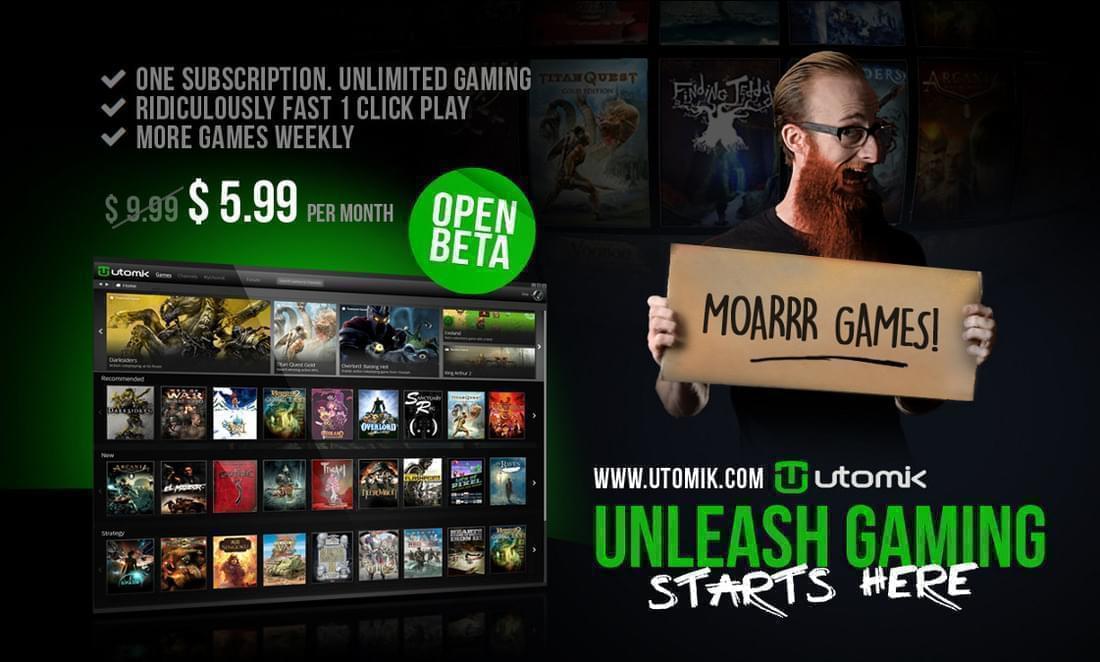 WESTLAKE VILLAGE, USA - Utomik, the “unlimited gaming” subscription service, today announced the start of its open beta period at a discounted introductory price of $5.99 per month as well as a free, no strings attached, 14-day trial. As from today, consumers can subscribe to Utomik’s open beta service that features games including Darksiders, Overlord, Titan Quest, The Raven, Evoland II and many more. Utomik open beta is now live in 30 countries across Europe, Canada and the US, with more countries following soon.

With a Utomik monthly gaming subscription, normally priced at $9.99 per month but discounted to $5.99 during open beta, consumers can play as many games featured on the service as they like, for as long as they want. Today, 145 games are available to choose from with more added each week. Utomik has secured publishing contracts for 600 titles including AAA, Indie and casual games as well as timeless classics and unexpected gems. Utomik’s service is advertisement-free. Users can register to join the open beta here.

Utomik's unique and proprietary instant play technology loads games up to 100 times faster than any other service. It downloads a small part of the game to a user’s hard disk, enough to start playing very quickly, while the rest continues to download to their PC. As games are played directly from a consumer’s own PC – it is lag-free play and has 100% original quality.

Utomik's vision to "Unleash Gaming" is designed to bring more games to more people by moving the industry into the era of subscription gaming, enabling consumers to access games as easily as they do TV shows, films and music today.

Previously, Utomik ran in closed beta mode and during this time, the service generated over 16,000 sign-ups and was extremely well received by its community. On a ratio of 1-10, when asked how fast games start on Utomik, the average emerged at 8 or higher. 77% said they would recommend it to a friend and 63% stated they enjoyed discovering new games this way.

Doki Tops, Utomik CEO, adds, “Gaming just became as accessible as TV shows, movies and music! Our open beta period marks the start of an exciting new phase in Utomik’s journey to ‘Unleash Gaming’. We are providing the remaining piece of the puzzle to people’s on-demand entertainment needs by adding gaming to create the full spectrum of amusement for all. Gamers can now join the movement and play any game they like for as long as they want for just $5.99 per month during open beta. Put simply, don’t wait, just play!”